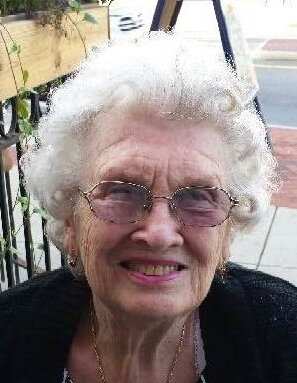 Please share a memory of Hilda to include in a keepsake book for family and friends.
View Tribute Book

Born in Johnsburg, NY on January 27, 1930, she was the first child of the late Frank Hewitt and Dorothy (Armstrong) Hewitt.  Hilda graduated from Johnsburg Central School in 1948 and from Green Mountain College in 1950 with a degree in business and accounting.

While working in Albany, she met Dick who wooed her by dancing his Boston Hop.  They were married on June 21, 1952 and raised three daughters and a son.  With four kids under seven in tow, they moved from Glens Falls to beautiful Bolton Landing where they lived for 41 years until Dick passed in 1993.

Over the years, Hilda was employed by Lamb Brothers Boathouse, the Boardwalk restaurant, and her dear friends, the Cutro family.

Hilda had an active and happy life.  She was a longtime Girl Scout leader, Sunday school teacher, and a Grand Matron of the Order of the Eastern Star.  She was an avid sewer, crafter, knitter, and ceramic maker.  With the nickname “Holiday Hilda, the house was always decorated to the max.  Hilda was all about having fun and a good time with family and friends.

Hilda was predeceased by her husband, Richard B. Dodge, and daughter, Victoria Lee Dodge.

The family would like to extend a special thanks and appreciation to all dedicated at-home caregivers, Dr. Bryan Smead, and especially Hilda’s son Rick, who made it possible for her to live at home until just before her passing.

In lieu of flowers memorial donations may be made to the Bolton Central School Scholarship Association.

Friends may call on Hilda’s family from 10am – 11am, Wednesday, July 20, 2022, at the Emmanuel United Methodist Church, 19 Stewart Ave., Bolton Landing.  Funeral services will be immediately following at the church at 11am.  Burial will follow in Bolton Rural Cemetery.

Look inside to read what others have shared
Family and friends are coming together online to create a special keepsake. Every memory left on the online obituary will be automatically included in this book.
View Tribute Book
Share Your Memory of
Hilda
Upload Your Memory View All Memories
Be the first to upload a memory!
Share A Memory
Send Flowers
Plant a Tree