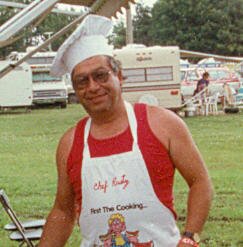 Please share a memory of Russell to include in a keepsake book for family and friends.
View Tribute Book

Rusty came into this world on January 17, 1945 in Newtonville, NY.  He entered the United States Navy in 1962 and served his country until 1965, he was aboard ship during the Cuban Missile Crisis. It was in 2012 that Rusty would obtain his high school diploma, thanks to Operation Recognition. Which recognizes the devotion and sacrifice of all Veterans who left school early by presenting them with a high school diploma.  He was so proud that he would final graduate high school, and graduating with his grandson made it even better.  Rusty was a lineman for many years, a fire observer on Pharaoh Mountain and retired from Gore Mountain where he was an electrician for numerous years.

When not at work he volunteered his time to numerous organizations.  Rusty was a volunteer fireman with Garnet Lake Volunteer Fire Department, union president at Gore Mountain, 4-H volunteer with his best friend Andy Sprague, 13 years promoting Upper Hudson Blue Grass Festival, a fisherman, hunter, tinker, trapper, RV enthusiast, BBQ king, collector of everything, and all around handyman.  The most important role he had was being an amazing husband, father, uncle and teacher.

Donations in Rusty’s memory can be made to St. Jude Children’s Research Hospital.

Friends may call on Rusty’s family from 11am – 1pm, Saturday, July 2, 2022, at the Alexander Funeral Home, 3809 Main Street.  A memorial service will be conducted at 1pm.  Burial will follow in Bates Cemetery, Johnsburg.

Look inside to read what others have shared
Family and friends are coming together online to create a special keepsake. Every memory left on the online obituary will be automatically included in this book.
View Tribute Book
Share Your Memory of
Russell
Upload Your Memory View All Memories
Be the first to upload a memory!
Share A Memory
Send Flowers
Plant a Tree