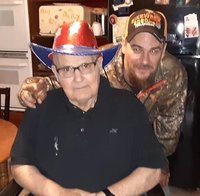 North Creek: James J. Anselmo, Sr., 77, of State Route 28, passed away peacefully, Tuesday, July 6, 2021 at his home following a long illness. Born December 13, 1943, he was the son of the late Joseph and Elizabeth Anselmo. Following his graduation from Warrensburg Central School, he enlisted in the United States Army and proudly served his country overseas and stateside for 12 years until his honorable discharge. He married Linda Prosser on April 20, 1964. Besides his parents, he is predeceased by two sons, Todd Anselmo and Joseph Anselmo. He is survived by his beloved wife of 58 years, Linda Anselmo of North Creek; three children, James Anselmo, Jr. of South Glens Falls, Kevin Anselmo of Stillwater, and Tammy Cleveland of North Creek. as well as 12 grandchildren, and numerous great-grandchildren, nieces, nephews, and cousins. A memorial service to celebrate his life will be conducted at 2 pm, Tuesday, July 13, 2021 at the Alexander Funeral Home, 3809 Main St., Warrensburg. Friends may call on James' family one hour prior to the service at the funeral home. Please visit www.alexanderfh.net for online guest book, condolences, and directions.