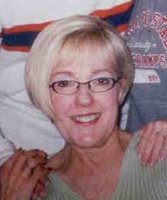 Lake George: Diana Margaret McFarland, 75, entered into eternal life on July 1, 2021. Diana was born on September 28, 1945, in Cambridge to George Henry McFarland and Margaret Milner McFarland. She was the loving mother of two sons who survive her: Todd (Stacie) Trulli and Kyle (Melissa) McFarland; and grandmother to Nathan Trulli, Noah Trulli, Charlotte McFarland, Aubrey McFarland, and Ellis McFarland. Diana loved Cambridge with all of her being. She loved telling tales about her fun times and mischief with her friends, many of whom she still kept in contact with. Amongst many of the things her family did for Cambridge - Diana was always proud that she had gifted the Cambridge Historical Society to the town upon her ownership. Diana loved spending summers in her youth at Green Pond and Lake St. Catherine. After graduation from Russell Sage with Honors, she enjoyed a brief career with International Paper before leaving the workforce to raise her two sons. Diana became owner of the Brew N’ Stew restaurant in Warrensburg in 2001 and quickly changed the name to George Henry’s in memory of her father. Diana loved to dine out, and her favorite pastime was shopping. She had been known to shut down stores with the employees locking her in until she had completed her shopping spree. Diana was an avid reader and loved to watch westerns. She was extremely quick-witted and could strike up a conversation with anyone. She adored cats and had been known to take in the strays of the neighborhood. If you asked Diana what her favorite food was, her answer would be “Miller Lite.” It was stocked in her home for most of her life; she always had some to offer a guest and an occasional family member if they were in dire straits. Diana loved to talk on the phone and was known to have conversations late into the night, as she was a night owl. Diana greatly missed many of her predeceased friends, and it is thought that she is already creating trouble with them on the “other side.” Upon Diana’s request, there are no calling hours scheduled. Diana will be laid to rest in Cambridge cemetery with her immediate family in attendance. Expressions of sympathy may take the form of donations in Diana’s memory to the Robyn J. Barst Pediatric Research Fund https://phassociation.org/barst-fund/ or checks may be mailed to: Robyn Barst Pediatric Research Fund, 630 168th St. 2nd Floor, Suite 241, New York, NY, 10032. Please visit www.alexanderfh.net for online guest book and condolences.