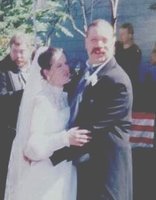 Warrensburg: Michael T. Kramar, 54, of River Street, passed away peacefully, Thursday, April 1, 2021 at his home following a long illness. Born October 23, 1966 in Glens Falls, he was the son of Frederick “Carl” Kramar of Warrensburg and the late Leona (Thompson) Kramar. He received his education and graduated from the Faith Baptist Church in Warrensburg. Following his graduation, he worked several odd jobs before finding his calling in the woods, working as a logger for many years with P. A. Haynes Logging for many years. Besides spending time with his family, he enjoyed camping, fishing, and bonfires with family and friends. Besides his mother, he is predeceased by his nephew, Robert J. Kramar, Jr. He is survived by his beloved wife of 23 years, Annette (Sneddon) Kramar of Warrensburg; his father, Carl Kramar of Warrensburg; his siblings, Karl Kramar of KY, Eleanor Kimball and her husband, Kenneth of Warrensburg, James Kramar of Queensbury, and Robert Kramar and his wife, Dianne of Warrensburg; sister-in-law, Kathy Galli and her husband, Paul of Millbrook, Lisa Blank and her husband, Joe of FL, brother-in-law, Paul Sneddon and Grant Sneddon, both of Millbrook. He is also survived by his best friend, Lance Chadwell of Warrensburg and several nieces, nephews, and cousins. Friends may call on Michael’s family from 9 to 11 am, Friday, April 9, 2021 at the Alexander Funeral Home, 3809 Main St., Warrensburg. A funeral service to celebrate his life will immediately follow the visitation at 11 am, at the funeral home. His earthly remains will be laid to rest in Warrensburg Cemetery. Please visit www.alexanderfh.net for online guest book, condolences, and directions.