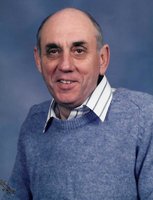 Warrensburg: Michael L. Lawler, 87, of Warrensburg passed away on December 11th, 2020 in Glens Falls Hospital following a month-long illness. Mike was born on May 4, 1933 in Ilfracombe, England to Alice May and Henry Joseph Lawler. He grew up in nearby Combe Martin until the age of 15 when he and his parents emigrated to the United States to begin a new life. He met and then married the love of his life, Helen J. Palmer, on April 11th ,1953. They were married for 66 years until the passing of Helen in 2019. Mike joined the United States Army and proudly served his country during the Korean War. Mike was an entrepreneur his whole life starting and selling many businesses including two bars, an auto parts store, etc. When he was not starting a new business, he could be found logging, trucking to build the Northway, or doing auto body repair. He was always busy and had a tremendous work ethic. When he retired, he stayed just as busy restoring old cars, spending time with family, or heading to one of his favorite spots in Maine. He was born on the water in England and he always yearned to be back on the coast that reminded him of home. Besides spending time with his family, he was devoted to his membership in the Fraternal Order of the Masons, Lodge #425 in Warrensburg. Joining in the early 1960’s, he became a life-long member and was well known for starting such fundraisers as the annual Lobster bake. His commitment to their values and mission never wavered. He held many offices over the years including District Deputy. He was also a member of the congregation of the First Presbyterian Church in Warrensburg. Michael was also pre-deceased by his parents, Alice and H. Joseph Lawler, his sister Cynthia Faulkner, and his grandson Kristian M. Lawler. He is survived by two sons Gary M. Lawler of Conyngham, PA (and his partner Stan), and Lawrence M. Lawler of Warrensburg (and his wife Jeanine). He also leaves his grandchildren, Brittany M. Mason of Warrensburg, Jonathan M. Lawler of Conyngham, PA, Krystle E. Lawler of Latham, NY, and Taylor A. Lawler of Warrensburg. They will all deeply miss “Pop.” He also leaves behind close friends, Jack Toney, Dwayne “Pickle” Perry, and Becky Lawler. A special thanks to Marilyn Richards for her friendship and care during the last several months. Friends may call on Mike’s family from 2 to 4 and 6 to 8 pm, Friday, December 18, 2020 at the Masonic Lodge #425, 3893 Main St., Warrensburg. A graveside service to celebrate his life will be conducted at 11 am, Saturday, December 19th in North Caldwell Cemetery, Truesdale Hill Rd., Lake George with Father Thomas Pettigrew, officiating. Masks and social distancing requirements will be followed. Please visit www.alexanderfh.net for online guest book and condolences.