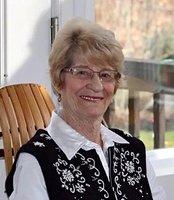 Newcomb: Jeannine C. Bureau, 90, of State Route 28N, passed away peacefully in her sleep, Sunday, July 19, 2020 at her home. Born October 16, 1929 in Lambton, Quebec, she was the daughter of the late Joseph and Angelina (Labreque) Bilodeau. She married Rene Bureau on June 27, 1953 at St. Agnes Lac Megantic, Quebec. Besides her parents, she is predeceased by her beloved husband of 62 years, Rene Bureau who passed away on October 2, 2015 and two sisters, Lucille Boulanger in 2019 and Lilliane Jacques in 2012. She is survived by a daughter, Rena Rizzo and her husband, Eugene, of Highland; three sons, Donald Bureau and his wife, Patricia, of Old Lyme, CT, Ricky Bureau and his wife, Peggy, of Coppell, TX, and David Bureau and his wife, Marla, of Halifax, Nova Scotia; nine grandchildren, Kevin (Tiffany), Steven, Scott, Garrett, Ricky, Alexandra, Hunter, Tori, and Chase; two great-grandchildren, Emma Lynn and Colden Rizzo; as well as several nieces, nephews, and cousins. Arrangements are pending and due to COVID restrictions, services will be conducted at a later date at St. Therese Roman Catholic Church in Newcomb at a time to be announced. Please visit www.alexanderfh.net for online guest book and condolences.