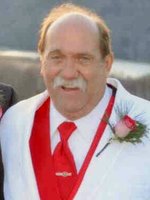 Bakers Mills: William F. “Bill” Dupuis, 72, of Bartman Road, He lost his courageous battle with cancer on Friday, April 3, 2020 at Glens Falls Hospital. Born April 9, 1947 in Moriah Center, he was the son of the late James and Ruth (Caul) Dupuis. He attended high school in Moriah and joined the U.S. Army where he worked as a Medic in Korea 1964-1966. After he returned from the military, Bill worked briefly for New York State Canal system followed by being employed as manager for Grand Union for a number of years. Before retiring, Bill enjoyed working at Gore Mt. When he wasn’t working, he enjoyed busting the chops of friends and family. He particularly took pride in harassing his brothers and since he had six of them it was easy game. Bill enjoyed going to casinos, making donations and playing cards. He loved spending time at the Barking Spider and Basil and Wicks where I am sure there were many stories to tell. His favorite story was from Basil and Wicks; this is where he met his wife Stephanie Rae Donahue. He would laugh and say that she made the mistake of sitting on the wrong stool. They fell in love and were married in 2012 and their beautiful twins, Savannah and Shelbie were born in 2013. Besides his parents, he is predeceased by his wife Stephanie Dupuis, his brothers James and Gerald Dupuis, his son-in-law David Sears, brother-in-law Raymond Tilley and his step-father Harold Watkins. He is survived by his children, Tisha Sears, Billie Jo Hoag, Savannah Dupuis and Shelbie Dupuis, his step-children Scott and Sherri Allard, his brothers Robert Dupuis (Rebecca Miller), Alan Dupuis, John Dupuis (Joyce), Paul Dupuis (Darlene), his sisters Glenda Tilley and Lori Linendoll (David), his grandchildren, Kiersten, Tatum, Lukas, and Madison Hoag and David and Dylan Sears. He had many nieces, nephews and step-brothers and step-sisters. Bill is also survived by his in-laws, Mike and Valerie Donahue (Bozeman, MT). At Bill’s request, there are no calling hours or funeral services scheduled. He will be laid to rest at the Gerald B. H. Solomon, Saratoga National Cemetery and a celebration of life will be conducted at a time to be announced. Please visit www.alexanderfh.net for online guest book and condolences.