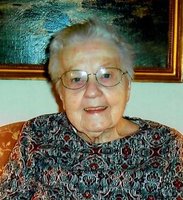 Lowville/North Creek: Grace H. Waddell, 96, passed away peacefully on January 24, 2020 at Lewis County Residential Home following a brief illness. Born Grace Helena Lavery on May 5, 1923 in Olmstedville, Grace was the daughter of the late Edward and Adelaide ("Addie" Richardson) Lavery. She was a lifelong resident of the area and graduated as Valedictorian of her 1940 class in Olmstedville. After graduation Grace worked as a 'nanny' for the children of Phillip and Louise Brassel in North Creek. She also worked as a waitress and the former Red Diner in North Creek where she met her future husband William R. Waddell. During WWII she worked at various factories in Schenectady and Rome, making parts for wartime machinery. Grace and Bill were married August 29, 1943 in Schenectady. She enjoyed many years of being a homemaker for her husband and 3 children. Grace always loved learning and took several courses in bookkeeping and English at Adirondack Community College. Later in life she was employed for several years at the Dept. of Motor Vehicles in Lake George before transferring to the Records Dept. in the same building. She retired from there in 1980. Grace was a longtime member of the former North Creek United Methodist Church and worked on several church social committees. Grace was very proud of her Irish heritage in the town of Olmstedville and could recite many of the local 'family trees' there. In her later years she enjoyed reading, playing dominoes and spending time with her family and caregivers. She had a wry sense of humor and a way of making her family laugh, love and cherish her. She will always be remembered as being a thoughtful Mom and grandmother who often bought surprise gifts to let you know she was thinking of you. She had a beautiful smile, even to the end. She will always be remembered as our "Amazing Grace". Besides her parents she was predeceased by her husband Bill who passed away on December 12, 1986, her siblings Vernon 'Pete' Lavery and wife Alice, sisters Marguerite Lavery and Catherine Hunt, her father and mother-in-law Roy and Mabelle Waddell, her in-laws Irene and William Adams, Downing and Helen Braley, her former son-in-law Robert E. Johnson and great-granddaughter Kourtney Carlile. She is survived by her son William C. Waddell and his wife Trudy of Valley Falls, and their children: William R, Heather, Matthew and Amy Waddell, daughter Kathleen W. Johnson of Aurora, CO. and her daughters Kristen Carlile, Kathie Lynn and "J.J." Pellini and their daughters Avery and Gianna Pellini and daughter Melinda Waddell and her fiancé John Boyea of Lowville, a brother Nolan Lavery and his wife Marilyn of The Villages, FL., as well as several nieces and nephews and her cat Noelle. Friends may call on Grace's family from 1 to 2 pm, Thursday, August 6, 2020 at the Alexander Funeral Home, 3809 Main St., Warrensburg. A memorial service to celebrate her life will immediately follow the visitation at 2 pm, at the funeral home. Her family wishes to thank a core group of staff from the second floor nursing home who were so supportive during her stay there; namely Brenda, Martha, Nichole, Heather, Sandra and Mary. Also her primary care physician in Lowville Dr. Monica Kwicklis , her staff as well as her current and past caregivers:, Deborah, Terri, Linda, Bethany, Loretta, and Charlotte who were all so kind and caring to Grace while she resided in Lowville with Melinda and John. Memorial donations in memory of Grace can be made to Lewis County Humane Society PO Box 682 Lowville, NY 13367, Lewis County Hospice or Lewis County Rescue Squad in Lowville, NY. Please visit www.alexanderfh.net for online guest book and condolences.