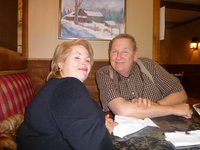 Warrensburg: We are mourning the tragic loss of Douglas M., 75 and Gail S. (Davis) Strodel, 72 who both died early in the morning of December 31, 2019 at their home in Warrensburg. Doug was born September 17th, 1944 in Syracuse, NY. He served in the US Air Force from 1965 to 1971, inventing the Strodel Loader in 1968. He also served in the Us Army Reserve. Gail was born August 28, 1947, also in Syracuse. They lived in their house in Warrensburg since 1976. Both were very well known in the community through D&G Hardware and D&G Coins. Doug also served as a part time Warren County Sheriff’s deputy and Warren County Sheriff’s Mounted Patrol. Doug served on the Warrensburg Town Planning Board in the 1990’s and ran as a candidate for the post of town supervisor and later for Sheriff in 1999. Both Doug and Gail had a passion for animals, having pets including horses, ducks, geese, dogs, and cats over the years. When not working or spending time with their pets, they could also be found working in their bountiful garden which also attributed to Gail’s enjoyment of baking and cooking. They recently celebrated their 50th wedding anniversary, having married in Cicero, NY in September of 1969. Doug is predeceased by his parents Elsa Neidhardt Sandness and Jacob Strodel, and two sisters Marlene (Pauls) Grosso-Corso and Georgia (Pauls) Leonard. He is survived by sisters Sandra (Strodel) Johnston and Jean Marie Caglia, brothers Karl Strodel and Mike Pauls. Gail is predeceased by parents Solomon Davis and Lillian (Fineman) Davis. She is survived by brothers Stuart Davis and Fred Davis, and sister Rhonda Brenner. Both are survived by nephew Jeffrey Davis and his wife Heidi (Miller) Davis; niece Shana (Davis) Feissner and her husband Robert Feissner; niece Rachael Davis, nephew Seth Brenner; nephew Brian Davis and his partner Lance Blevins; niece Melissa Davis; grandnephews Alexander, Tyler, Dylan, and Zachary Davis, Collin, and Logan Feissner great-grandniece Karen Mitchell, niece Camie (Strodel) Sellin, and numerous nieces and nephews. Friends and family may call at the Alexander Funeral Home in Warrensburg from 1 to 4 pm on Saturday January 25th. Funeral services will be held in Syracuse at a date to be determined. In lieu of flowers, please make a donation to the Warrensburg Volunteer Fire Company. Please visit www.alexanderfh.net for online guest book and condolences.